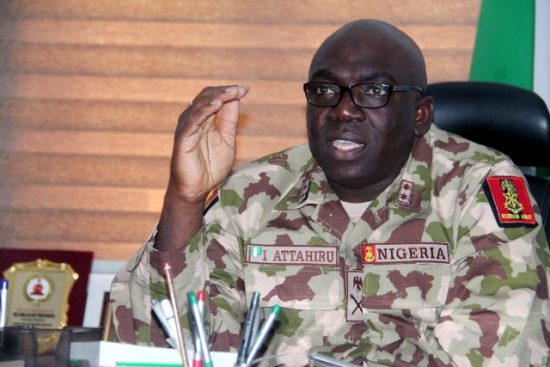 Attahiru’s warning was delivered in Uyo at the first Commanding Officers’ Workshop 2021.

Igboho recently unilaterally declared that the Southwest part of the country was no longer part of Nigeria.

Dokubo had also announced the establishment of the Biafra Customary Government in which he incorporated some parts of the Southeast and South-south as part of the territory.

But Attahiru promised that the Nigerian Army will deal decisively with every form of security threat confronting the nation, including those posed by the secessionist agitators like Igboho and Dokubo.

Attahiru assured the nation that the Nigerian Army would soon surmount attempts by some individuals to compromise the territorial integrity of the country by the declaration of sovereignty on behalf of ethnic nationalities in the country.

“The Nigerian Army under my leadership would remain proactive and jointly work with other security agencies to decisively deal with threats facing the nation.

“The Nigerian Army under my watch remains resolute and is poised more than ever before to decisively deal with individuals or groups that threaten the peace, security, and stability of our great nation,” he said.

Attahiru called on participants at the workshop with the theme, “Repositioning the Nigerian Army to Defeat Contemporary Adversaries in a Joint Environment.” to commit themselves to the dictates of their duty to the nation.

The COAS said that he would continue to provide mission-oriented training through workshops and build capacity for the military that would make the army dependable and feared by all adversaries.

In his remarks, Gov. Udom Emmanuel of Akwa Ibom said the security challenges confronting the nation called for a military that was ready and equipped to face the problems.

Emmanuel, who was represented by the Deputy Governor, Mr. Moses Ekpo, urged the military to intensify and expand the strategies, techniques, and tactics needed to contain all insecurity across the country.

He commended the various security agencies in the state for the synergy and harmonious working relationship among them which he said had brought about security in the state and promised to continue to support them.

“With the security realities confronting our nation, the military more than ever should be ready and equipped to face and confront these realities by ensuring that the service maintains the highest possible standard of continuous training for optional performance.

“It is reassuring that despite other operational commitments across the country, the new Chief of Army staff has considered it necessary to organize this workshop,” Emmanuel said.

Earlier in his address, the General Officer Commanding 6th Division, Maj.-Gen. Sani Mohammed said the workshop was the first major achievement of the chief of army staff.

He said that the workshop was delayed due to the COVID-19 pandemic, adding that it was an opportunity to enhance training and build capacity for military officers.

Mohammed said that the workshop had participants drawn from the South-South region of the Nigerian Army.

Tue Mar 23 , 2021
Fans of the popular singer, Davido reacts to his grammatical blunder online moments after he mocked a fan for doing the same. The 28-year-old singer in a bid to celebrate his official record label DJ, @Ecoolofficial on his Insta stories, made a grammatical error in his birthday wishes. READ  […]