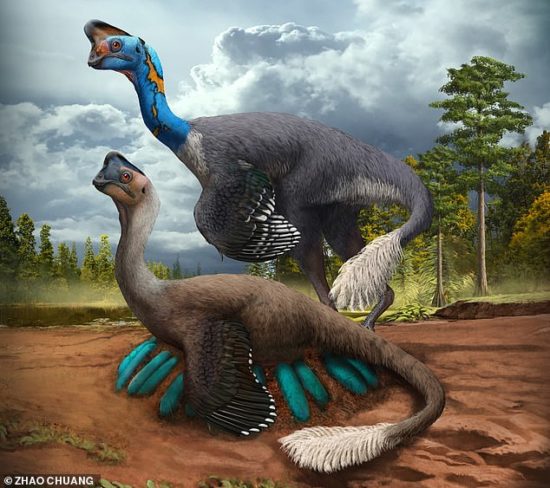 The fossilized remains of a dinosaur sitting on a nest of eggs, complete with embryos preserved inside, have been unearthed from China, a study has reported.

They find — a world first — is an oviraptorosaur, one of a group of bird-like, theropod dinosaurs that thrived from 130–66 million years ago, during the Cretaceous Period.

According to the experts, the specimen was found in 70 million-year-old rocks excavated near the railway station in Ganzhou city, in Jiangxi Province. 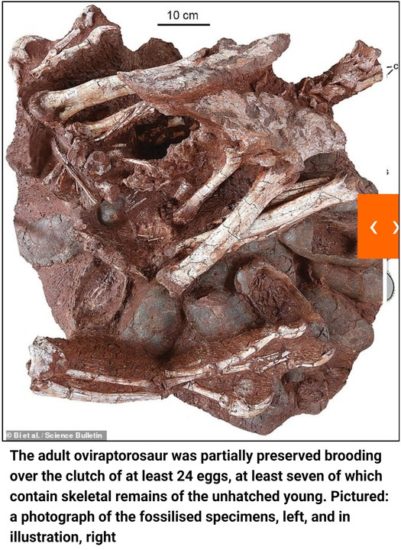 The adult oviraptorosaur was partially preserved brooding over the clutch of at least 24 eggs, at least seven of which contain skeletal remains of the unhatched young.

The late-stage development of the embryos allowed the paleontologists to rule out the possibility that the adult had died while laying its eggs.

Instead, the find suggests oviraptorosaurs incubated their nests like their modern bird cousins — rather than just guarding them in the manner of a crocodile.

This was supported by oxygen isotope analyses of the eggs, which indicated that they were incubated at high temperatures just like modern birds’ eggs.

‘This kind of discovery — in essence, fossilized behavior — is the rarest of the rare in dinosaurs,’ said paper author and vertebrate paleontologist Matthew Lamanna of the Carnegie Museum of Natural History in Pittsburgh, Pennsylvania.

‘Though a few adult oviraptorids have been found on nests of their eggs before, no embryos have ever been found inside those eggs.

‘In the new specimen, the babies were almost ready to hatch, which tells us beyond a doubt that this oviraptorid had tended its nest for quite a long time.

‘This dinosaur was a caring parent that ultimately gave its life while nurturing its young,’ he concluded. 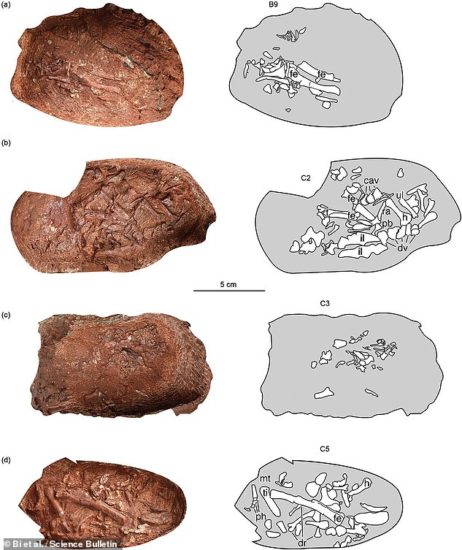 Analysis of the fossil embryos revealed that, while all were well-developed, some had reached a more mature stage than others, suggesting that had they not been buried and fossilized, they would likely have hatched at slightly different times.

This characteristic — which experts dub ‘asynchronous hatching’ — appears to have evolved independently in oviraptorid dinosaurs and some modern birds, the researchers explained.

The team also found a cluster of pebbles preserved in the adult oviraptorid’s abdominal region, which they said are gastroliths, or ‘stomach stones’, which would have been swallowed to help the dinosaur digest its food.

This is the first time that verified gastroliths have been found preserved in a fossilized oviraptorid and thus may lead to new insights about their diets.

‘It’s extraordinary to think how much biological information is captured in just this single fossil,’ said vertebrate paleontologist Xing Xu of the Chinese Academy of Sciences in Beijing.

‘We’re going to be learning from this specimen for many years to come,’ he added.